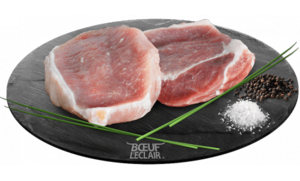 Geographical area: The départements of Eure, Seine-Maritime, Calvados, Orne and Manche, as well as the cantons bordering on these départements.

Evidence of origin Evidence of the product's origin is provided by means of a tattoo applied to each pig by the breeder when it is three weeks old then by the attachment of a tag when the fattening process begins. In addition, on leaving for the abattoir, each pig is tattooed with the farm number. At the abattoir, each carcass is stamped with the words "LE FERMIER NORMAND", and each cut piece is given a tamperproof label. The identified items are documented at each stage of the process.

Acquisition: Each pig has access to its own outdoor run with an area of 50 square metres. 75% of the pigs' feed consists of cereals and their by-products. The minimum age for slaughter is 26 weeks, and selection for meat quality is carried out at the abattoir.

Link: The link with the geographical origin of the product derives from the following factors:

(1) traditional rearing methods (outdoor run - feeding on cereals produced in the region), and

(2) a reputation attested by the choice of this meat by prestigious Parisian restaurateurs and by Japanese restaurateurs for festive occasions. In addition, Normandy farm pork is chosen for the manufacture of traditional charcuterie products such as the salami style dry sausage (saucisson sec) supplied to seafarers.

History: Pig rearing in Normandy dates from the Middle Ages. Several local breeds have existed in the region. Normandy farm pork was the first type of pork ever to be awarded a red label.