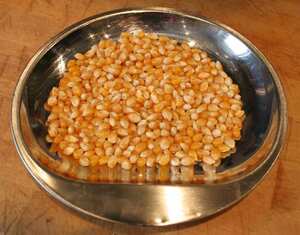 Popcorn or popping corn is a type of corn which explodes from the kernel and puffs up when heated. Special varieties are grown to give improved popping yield. Some wild types will pop, but the cultivated strain is Zea mays averta, which is a special kind of flint corn. The process of making popcorn was first discovered by Native Americans thousands of years ago.

Why does popcorn pop?

Each kernel of popcorn contains a certain amount of moisture and oil. Unlike most other grains, the outer hull of the popcorn kernel is both strong and impervious to moisture, and the starch inside consists almost entirely of a hard, dense type.

As the oil and the water are heated past the boiling point, they turn the moisture in the kernel into a superheated pressurised steam, contained within the moisture-proof hull. Under these conditions, the starch inside the kernel gelatinises, softening and becoming pliable. The pressure continues to increase until the breaking point of the hull is reached: a pressure of about 135 psi (930 kPa) and a temperature of 180°C. The hull ruptures rapidly, causing a sudden drop in pressure inside the kernel and a corresponding rapid expansion of the steam, which expands the starch and proteins of the endosperm into airy foam. As the foam rapidly cools, the starch and protein polymers set into the familiar crispy puff.

We have a list of flavoured popcorns here that all use the plain popcorn recipe as a base.