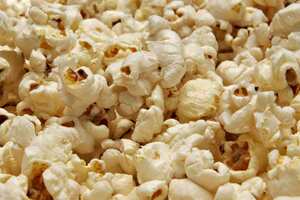 Puffed rice or other grains are occasionally found as street food in China, Korea , and Japan, where pedlars implement the puffing process using an integrated pushcart/puffer featuring a rotating steel pressure chamber heated over an open flame. The great booming sound produced by the release of pressure serves as advertising to attract customers.

Puffed grains are popular as breakfast cereals and in the form of "rice cakes". While it is easy to recognise that the cereals came from whole grains, the expansion factor for rice cakes is even greater, and the final product is somewhat more homogeneous.