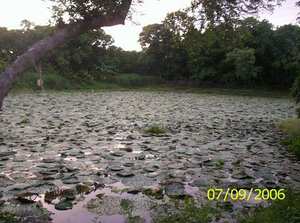 A pond of cultivated Euryale in northern India

Euryale ferox (also known as fox nut, foxnut, makhana, or gorgon plant) is the only species in the genus Euryale. It is a flowering plant classified in the water lily family.

Euryale is an annual plant native to eastern Asia, and is found from India to Korea and Japan, as well as parts of eastern Russia. It grows in water, producing bright purple flowers. The leaves are large and round, often more than a meter (3 feet) across, with a a leaf stalk attached in the center of the lower surface. The underside of the leaf is purplish, while the upper surface is green. The leaves have a quilted texture, although the stems, flowers, and leaves which float on the surface are covered in sharp prickles. Other leaves are submerged.

The plant produces starchy white seeds, and the seeds are edible. The plant is cultivated for its seeds in lowland ponds in India, China, and Japan. The Chinese have cultivated the plant for over 3000 years. More than 96,000 hectares of Bihar, India, were set aside for cultivation of Euryale in 1990-1991. The plant does best in locations with hot, dry summers and cold winters. Seeds are collected in the late summer and early autumn, and may be eaten raw or cooked. In Chinese, the plant is called qiàn shí. Its edible seeds are used in traditional Chinese medicine, where they are often cooked in soups along with other ingredients, and believed to strengthen male potency and retard ageing. In India, particularly in the northern and western parts of the country, Euryale ferox seeds are often roasted or fried, which causes them to pop like popcorn. These are then eaten, often with a sprinkling of oil and spices.

In Mithila culture of Bihar, India, the makhana is an auspicious ingredient in offerings to the Lord during festivals and is used in cooking, specially to make a porridge/pudding called kheer of makhana or makhane ki kheer.

The name Euryale comes from the mythical Greek Gorgon by the same name. The Soviet Union issued a postage stamp featuring this species.