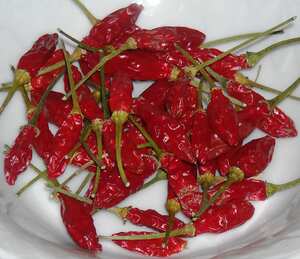 Piri-piri, peri-peri, pel-pel, or peli-peli is the name used in Mozambique and Angola to describe the African bird's-eye chilli. The variations in spelling derive from the various pronunciations of the word in parts of Africa, although 'piri-piri' is the correct spelling in Portuguese. In South African and American English and Afrikaans, the spelling is 'peri-peri', although the British favour the Portuguese spelling.

Piri-piri (aka African Devil, African birdseye or African red devil) is a cultivar of Capsicum frutescens, one of the sources of chilli pepper, that grows both wild and domesticated. It is a small and extremely spicy member of the capsicum genus. It is similar in both appearance and heat to the Mexican piquín chilli pepper. The plants are usually very bushy and grow in height to 45-120 centimeters, with leaves of 4-7 cm length and 1.3-1.5 cm width. The fruits are generally tapered to a blunt point and measure up to 2.5 centimeters long. Immature pod colour is green, mature colour is bright red or purple. Heat strength is 7/10.

In Mozambican cuisine, piri-piri is often used in preparing sauces and marinades for roast and grilled dishes, especially chicken and various fish. It is widely used in a vast number of dishes of Portuguese cuisine. Dried forms of the chilli are found all over Portugal and are used to spice up meat and chicken dishes. They are hot with a mellow sweetcorn flavour. They can be crumbled straight into sauces or meat dishes.