Piccalilli is a Western interpretation of Indian pickles, a relish of chopped pickled vegetables and spices; regional recipes vary a great deal. 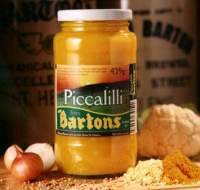 British piccalilli contains various vegetables— invariably cauliflower and marrow —and seasonings of mustard and turmeric. It is used as an accompaniment to foods such as sausages, bacon, eggs, toast, cheese, and tomatoes. It is similar to Branston pickle, except it is tangier and less sweet, coloured bright yellow (using turmeric) rather than brown, the chunks are larger.

In the Northeastern United States, commercial piccalillis are based on diced sweet peppers, either red or green. This style is very similar to sweet pepper relish, with the piccalilli being distinguished by having a darker red or green colour and like British piccalilli, the chunks are larger and it is tangier and less sweet.

In the Midwestern United States, commercial piccalillis are based on finely chopped gherkins; bright green and on the sweet side, they are often used as a condiment for Chicago-style hot dogs. This style is sometimes called "neon relish".

In the Southern United States, piccalilli is not commonly served. In its place, chow-chow, a relish with a base of chopped green (unripe) tomatoes is offered. This relish may also include onions, bell peppers, cabbage, green beans and other vegetables. While not exactly similar to other piccalillis, chow-chow is often called as such and the terms may be used interchangeably.

The Oxford English Dictionary traces the word to the middle of the 18th century when, in 1758, Hannah Glasse described how "to make Paco-Lilla, or India Pickle". The more familiar form of the word appears a decade later in a book for housekeepers in a section on how "to make Indian pickle, or Piccalillo". The spelling "piccalilli" can be seen in an advertisement in a 1799 edition of The Times.