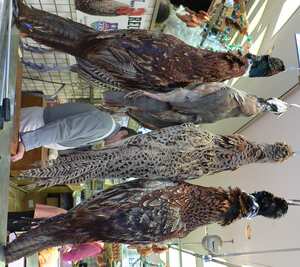 Pheasants at a butcher's shop in Toulon, France

Common Pheasants are bred to be hunted and are shot in great numbers in Europe, especially the UK, where they are shot on the traditional formal "driven shoot" principles, whereby paying guns have birds driven over them by beaters, and on smaller "rough shoots". The open season in the UK is 1 October - 1 February, under the Game Act 1831. Generally they are shot by hunters employing gun dogs to help find, flush, and retrieve shot birds. Retrievers, spaniels, and pointing breeds are used to hunt pheasants.

Pheasant farming is a common practice, and is sometimes done intensively. Birds are supplied both to hunting preserves/estates and restaurants, with smaller numbers being available for home cooks. Pheasant farms have some 35 million birds in the United Kingdom.

The carcasses were traditionally hung for a time to improve the meat by slight decomposition, as with most other game. Modern cookery generally uses moist roasting and farm-raised female birds. In the UK, game is making somewhat of a comeback in popular cooking, and more pheasants than ever are being sold in supermarkets here. Generally, if you buy a brace from an independent butcher, you will be sold one hen and one cock pheasant.

Pheasant is at its best and in season during the following months: November & December.