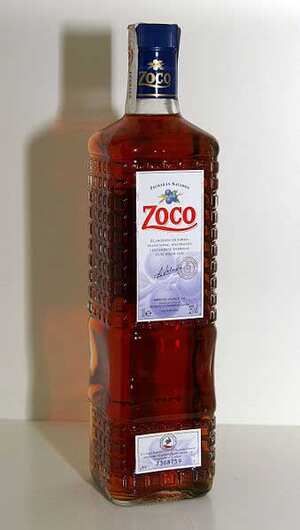 A bottle of Zoco

Patxaran (Basque from baso aran (wild plum); called Pacharán in Spanish) is a sloe-flavoured liqueur commonly drunk in Navarre and in the rest of Spain.

The liqueur is made by soaking sloe berries, collected from the blackthorn, in an anise-flavoured spirit (anisette) with a small number of coffee beans and a vanilla pod for several months. It results in a light reddish-brown sweet liquid, around 25-30% alcohol by volume. It is served cold or on ice as a digestif.

The drink was essentially a homemade liqueur of rural Navarre, but became popular in the late 19th century. It was commercialised in the 1950s and became very popular outside Navarre. One theory holds that young Navarrans took bottles with them on National Service, popularising patxaran in the rest of Spain. There are now moves to ensure that the drink's name is protected to ensure its quality, tradition and Navarrese identity. The regulator of Patxaran of Navarre insists that no colourings or flavourings are added, that the maceration is between one and eight months and on the amount of sloes used.

The oldest commercial brand is Zoco, first sold in 1956, founded by the family of Ambrosio Velasco, who had been producing patxaran in the Viana area since 1816 and now owned by Pernod Ricard. Other brands include Etxeko, Kantxa, Barañano Atxa and Baines. Seven million litres a year are commercially produced.