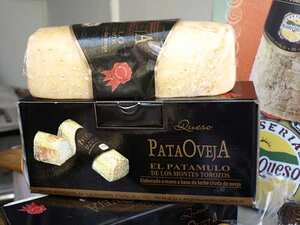 PataOveja is a semi-hard, unpasteurised ewes' milk cheese produced by Quesería Montequesos, in Villanubla (Valladolid) in the Spanish region of Castilla-León. This is a family business with a long tradition of making cheese, and today, Abel Ramos is a fifth generation cheesemaker.

This artisan cheese is made to a traditional recipe from the north of the Valladolid province and is medium to strong in strength. It is slightly compact, without holes and has an almost brittle texture. It is straw yellow in colour and has a fine, natural, yellow rind. During the 2-3 months maturation period, the cheese is periodically brushed to prevent an overgrowth of mould. It has a creamy, intense and pleasant flavour with a characteristic aroma of ewes' milk, which becomes stronger with age. It has the shape of an oval tube and has a 55% fat in dry matter content.