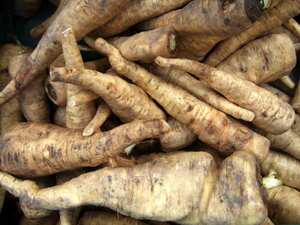 The parsnip (Pastinaca sativa) is a root vegetable related to the carrot. Parsnips resemble carrots, but are paler than most and have a stronger flavour. Like carrots, parsnips are native to Eurasia and have been eaten there since ancient times.

The parsnip originates in the Mediterranean region and originally was the size of a baby carrot when full grown. When the Roman Empire expanded north through Europe the Romans brought the parsnip with them. They found that the parsnip grew bigger the further north they went.

Parsnips can be boiled, roasted or used in stews, soups and casseroles. In some cases, the parsnip is boiled and the solid portions are removed from the soup or stew, leaving behind a more subtle flavour than the whole root and contributing starch to thicken the dish. Roasted parsnip is considered an essential part of Christmas dinner in some parts of the English speaking world and frequently features in the traditional Sunday Roast. Parsnip can be eaten raw.

Peel old tired looking parsnips but just rub the skin with a pan scourer if they are young and fresh. An unusual way to cook parsnips is to cut then into paper-thin strips with a peeler or mandolin and stir-fry them with walnut oil and then sprinkle with freshly chopped parsley. Try slicing them very thinly and frying with some nice fatty bacon, throwing in a handful of pine nuts at the end. If you want to be conventional, cook them with or in the same way as carrots. Ideally keeping the pieces or slices the same size.

Parsnips are at their best and in season during the following months: September, October, November, December, January & February.