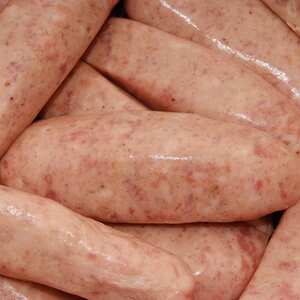 Newmarket sausage is a PGI sausage from Suffolk in England.

‘Newmarket Sausage’ is a seasoned pork sausage made using fresh, primal cuts of meat from either the whole carcass, the shoulder or belly, and seasoned with a selection of herbs and spices.

In appearance the uncooked sausage has the natural colour of the pork meat, deep pink-beige with a few flecks of seasoning, it has a dry and coarse texture with visible pieces of lean meat and fat, which give the sausage a slight bite when eaten. The taste is predominantly of pork and moderately seasoned from the herb and spice mix used in its production although the taste and colour may vary according to the butcher’s particular blend of seasoning.

Traditional seasoning for ‘Newmarket Sausages’ includes combinations of the following and must make up to a maximum 3% of the finished product:

In addition, natural flavourings of dried lemon as an antioxidant, sulphites as a preservative and sodium phosphate as a binding agent can also be added. The sausages must have a minimum meat content of 70% which includes a fat content of less than 20%. The balance is bread, rusk and water depending on the manufacturer’s recipe.

‘Newmarket Sausages’ are usually presented in lengths of about 10cm to 15cm long, 2.5cm to 3.5cm in diameter, and are slightly curved in appearance. They are also produced as: a chipolata style sausage which is between 8cm and 12cm long, a cocktail sausage (6cm) and a ‘jumbo’ (between 20cm and 24cm). They are sold through retailers and delicatessens either in pre-packed or loose from the counter.

‘Newmarket Sausages’ are seasoned pork sausages made using fresh, primal cuts from either the whole carcass, the shoulder or belly and contain a selection of herbs and spices. The meat used in the preparation of ‘Newmarket Sausages’ must be pork which has been rough cut, giving a coarse texture. The meat may be sourced from outside the area but must not contain any skin, gristle, rind, offal or any form of mechanically recovered meat.

The production, processing and preparation of ‘Newmarket Sausage’ must take place in the defined geographical area, this includes preparation of the raw materials as follows:

— addition of seasonings and other ingredients

— mixing and kneading of ingredients

The area of production of the ‘Newmarket Sausage’ includes the town of Newmarket and the surrounding region specifically within the following road system: from junction 37 on the A14, north on the A142 left at River Lane encompassing Fordham to Collins Hill up to junction B1102. Left at junction taking B1102 until it meets the A142. Then head north along the A142 to its junction with the A1123. Continue through the village of Wicken in a north-west direction turning south down Upware Road to the village of Upware. Continue on the minor roads, namely Great Drove, Headlake Drove, Little Fen Drove, Barston Drove, Fair Green to the village of Reach. Continue on through to Swaffham Prior, turning south-west on B1102 to Swaffham Bulbeck, and then turning south-east onto Swaffham Heath Road, crossing over the A14 to the meeting with A1304 to Dullingham. Crossing the B1061 at Dullingham continue onto Stetchworth Road and through Ditton Green, onto Woodditton. From there turn right (south-east) on Kirtling Road, and onto Woodditton Road to Kirtling Green. Turn left (north) at The Street and towards Kirtling. Head north-east from Kirtling taking first right (south-east) at Upend towards the B1063, turning left (north) on the B1063. Follow the B1063 to the B1085 divergence heading north on B1085 up to Dalham, follow the B1085 and turn north-west to Moulton up towards Kentford to regain the A14 following the A14 west bound to junction 37.

The town of Newmarket has been a famous horse racing venue since the 17th century. The sausage evolved from the pig-keeping tradition associated with horse racing stables, where pigs were kept to graze on stable scraps and keep racing yards free of debris. By the early 20th century, a number of butchers in Newmarket had begun producing sausages as evidenced in the censuses of 1881 and 1891.

Newmarket has been associated with horse racing since King James I organised the first race on the site which was run in 1622. The King had visited Newmarket on 27 February 1604 when he went hare coursing on the heath surrounding the town and since then he became a frequent visitor to the town. The world’s oldest surviving horse race, The Town Plate, dating from 1665 was established by Charles II at Newmarket and ‘Newmarket Sausages’ have traditionally been given as part of the prizes in this race since 1952. Modern stables no longer keep pigs but the East Anglia area of the United Kingdom, where Newmarket is situated, is well-known for pig farming. This is due to the predominant arable/cereal farms concentrated in the area where the pigs are fed on the cereal by products. The bread originally used in the sausages was leftover loaves from local bakers who found it a handy outlet for day-old bread which had become too stale to sell as ‘fresh’. This custom is still maintained today.

‘Newmarket Sausages’ have a high meat content and coarse cut texture which is seasoned. Local producers continue to make the sausages using the traditional recipes which have been handed down through generations.

‘Newmarket Sausage’ is renowned for its coarse highly seasoned texture which includes white and black pepper, salt, thyme, parsley, nutmeg and the addition of natural flavourings of dried lemon as an antioxidant. ‘Newmarket Sausages’ have become inextricably linked to horse racing as they were sold as a quick hot snack to eat at the races and in the various hostelries during the racing season. Race-goers also bought them to take home after the event. Their popularity has spread beyond the racecourse and remain popular with the Royal Family.

Reputation of the product

‘Newmarket Sausages’ soon became a popular snack with the horseracing fraternity, which included members of the Royal Family. The sausages have been popular with the Royal Household since the beginning of the 19th century. The recipe for the ‘Newmarket Sausage’ is unchanged since the days of Queen Victoria, and continues to be made to the same exacting standards as they always have been. Handmade with care in small batches, and free from artificial colouring and flavourings.

Popularity of the sausages soared far and wide beyond the horseracing circles, and an extract from the Newmarket Local History Society’s chronicles records notes of a railway clerk spending two or three hours every race week booking parcels of the sausage on the race meeting trains during the busy horse-racing season, when railway communications became more frequent.

Sausage production was inevitable in Newmarket given its location in Suffolk. The county had long been a major producer of good pork, the meat of the black Suffolk pig was prized as being sweet and tender. In the Newmarket area stable yards and local cottagers kept pigs which were allow to roam freely and which fed on scraps and forage. The town had a dozen or so butchers in the late 19th and early 20th century, many breeding, fattening and slaughtering their own pigs to supply their own sausages. Although a dozen butchers were said to be operating in Newmarket in the early 20th century each producing their own sausages, gradually the number of shops declined leaving just three producers of the ‘Newmarket Sausage’. Although the earliest reference to Newmarket and sausages is in 1618, a distinct type of sausage called the ‘Newmarket Sausage’ only appears in the literature in the mid-1800’s, the 1849 reference above being the earliest so far discovered.

More recently there have been numerous references to the ‘Newmarket Sausage’ in cookbooks and guide books. They are described in the ‘Traditional Foods of Britain’ (Laura Mason with Catherine Brown, Prospect Books 1999), part of an inventory of the food products from all the regions of the European Union and Clarissa Dickson-Wright, in her latest book, recalls her earliest experience with ‘Newmarket Sausages’. Google has 4,190 references to the ‘Newmarket Sausage’. The Newmarket Local History Society in its review of Newmarket history gives a full write-up to the local production of sausages, substantiating all that is claimed. One producer of ‘Newmarket Sausages’ has been supplying his sausages under Royal Warrant since 1907 and is currently warrant holder as supplier to H.M. The Queen. Another producer’s sausages are given as a traditional prize to the winning jockeys of the country’s oldest horse race, the Newmarket Town Plate.