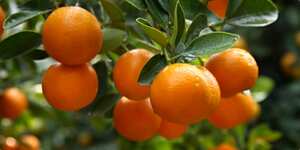 ZOI ‘Neretvanska mandarina’ is a fruit of the mandarin orange tree belonging to the Unshiu-Satsuma Group (Citrus unshiu Marcovitch). In terms of botanical systematics, it belongs to the family Rutaceae, subfamily Aurantioideae, genus Citrus and species Citrus reticulata ‘Blanco’.

The ‘Neretvanska mandarina’ fruit is a segmented fleshy berry (hesperidium) with rind that separates easily from the pith. The edible part of the fruit is juicy, without pips, orange in colour, and divided up into segments which can be separated from each other easily. The carotenoid content of the edible part of the ‘Neretvanska mandarina’ fruit is between 15,50 and 26 mg/kg. The taste is acidulous, refreshing and with a sweet note depending on the ratio of sugar to acid in the fruit. The fruit varies from flattened to flattened round in shape. The colour of the rind changes and varies depending on the ripeness of the fruit. The rind is light green when the fruit starts to ripen, gradually changing from light yellow to gold and finally to orange when fully ripe.

The fruit is collected in boxes (crates) of a capacity of 30 kg, stacked on pallets and delivered to sales and distribution centres. Further processing of the fruit takes place within those centres according to the following procedure: quality and traceability control at entry, ripening of the fruit (if necessary), calibration, waxing by spraying, drying, cooling at a temperature of 5-8 °C and exit quality and traceability control at the end of the process. The maximum amount of time permitted for getting the ‘Neretvanska mandarina’ ready for market (from the time of arrival of the fruit at the sales centre to the time of dispatch) is 5 days or 120 hours.

The geographical area of the Neretva Valley in which ‘Neretvanska mandarina’ is produced is bordered to the north by Bosnia and Herzegovina and bounded to the south by the coast of the Adriatic Sea. To the south, south-east and north-west, the Neretva Valley is delineated by the Dinaric mountain chain. The area of production of ‘Neretvanska mandarina’ encompasses the towns of Metković, Opuzen and Ploče and the municipalities of Slivno, Kula Norinska and Zažablje. 5. Link with the geographical area The micro-climate of the area is determined by its proximity to the sea, which has the effect of mitigating the low winter and high summer temperatures. In the Neretva Valley area, the average annual temperature based on the decade 2002-2012 is 15,8 °C. The mean winter temperature is 7,25 °C. Relative humidity of the air is a bio-climatic factor of major significance. This, along with air temperature and wind, is very important for ensuring a regular transition between vegetative and generative phases in the growth of the mandarin trees.

The average relative humidity (10-year average) is 69 %. The abundance of water, lakes and rivers with rugged watercourses and hand-dug open-water drainage channels are the Neretva Valley area’s main characteristics and make it unique also hydrologically. The maximum distance of ‘Neretvanska mandarina’ plantations from natural sources of open water is 500 metres. The hydrological attributes of the area have resulted in a high groundwater level and elevated relative air humidity, which is particularly marked when the fruit is ripening (in September, October and November). At that time, an optimal supply of water to the plants is of crucial importance for fruit quality. In terms of soil, the Neretva Valley area is characterised by sediments of alluvial origin of markedly heterogeneous composition. In terms of texture, loamy sand and sandy clay loam predominate.

Their pronounced capillarity is conducive to the growth of the mandarins. As a result of the abovementioned natural characteristics of the area of cultivation, the ‘Neretvanska mandarina’ fruit is distinguishable by its thin, smooth rind that is easy to peel and by being seedless with segments that separate easily. The edible part of the fruit is golden yellow in colour, which changes to orange as it ripens. This is linked to the high carotenoid content. One of the key characteristics of mandarins from the Neretva region is the high carotenoid content in the edible part of the fruit. The results of analyses carried out on samples of ‘Neretvanska mandarina’ established that the concentration of carotenoids in the flesh of the fruit was above average. In addition, the ‘Neretvanska mandarina’ fruit is distinguished by the high juice content in the edible part of the fruit, its high dry matter content and the harmonious balance of sugar and acid, which gives it its particular organoleptic characteristics: a refreshing taste and pronounced aroma.

Plantation-style cultivation of mandarins in the Neretva Valley began following the completion of reclamation works there in 1961 and 1962. According to church records (of the Sv. Ilija parish office in Metković), ‘despite the great drought in the Neretva Valley in 1971, the mandarin yield is estimated to be as high as 900 tonnes’. Therefore ‘Neretvanska mandarina’ is a specific product, the particularities of which are influenced not only by interaction with the environment (climate, location and terrain), but also by a long-standing tradition of production. Geographically the Neretva Valley is one of the three most northerly citrus-growing regions in Europe. This in large part determines the structure of production, choice of cultivars and rootstock, which ultimately affect key fruit quality components.

All plantings of ‘Neretvanska mandarina’ for commercial purposes are grafted onto Poncirus trifoliata rootstock. The advantages this affords, reflected directly in the quality and earliness of growth of the fruit, lead to the choice of this rootstock being considered indispensable. Apart from that, the proximity to the sea has a strong influence on daily variations in air temperature (from day to night). The fluctuations are particularly pronounced in the autumn, when the temperature of the sea can often exceed that of the surrounding air. These temperature fluctuations have a direct effect on the colour of the fruit, the amount of carotenoids in its pulp and the uniformity and earliness of maturation. A long-standing tradition of cultivation dating back more than 80 years, and the application of new know-how and technology have contributed significantly not only to the expansion of mandarin cultivation in the Neretva Valley over the last decade, but also to improvements in the quality.

Despite numerous changes in agricultural technology, all of the key elements of the geographical area and traditional cultivation have been preserved. These relate above all to auxiliary technical processes (cutting, pruning of the crown, removal of wild shoots, removal of fruit from young plantings) which are still performed exclusively by hand. Reference to publication of the product specification