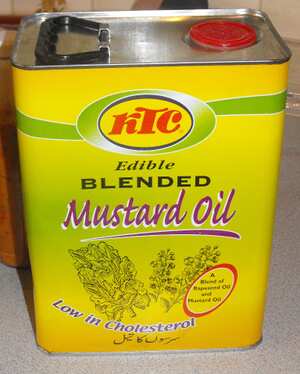 Mustard oil has a strong sinus irritating aroma, like that of horseradish or wasabi, a hot nutty taste, and is often used for cooking in Uttar Pradesh, Gujarat, Orissa, Bengal, Bihar, Jharkhand, Chhattisgarh, Assam and other areas of India and Bangladesh. In north India, it is mainly used in frying fritters. In Bengal, it is the traditionally preferred oil for cooking, although nowadays neutral flavoured oils like sunflower oil are also extensively used. The oil makes up about 30% of the mustard seeds. It can be produced from black mustard (Brassica nigra), brown Indian mustard (Brassica juncea), and white mustard (Brassica hirta).

Mustard oil has about 60% monounsaturated fatty acids of which 42% erucic acid and 12% oleic acid, it has 21% polyunsaturates of which 6% is the omega-3 alpha-linolenic acid and 15% omega-6 linoleic acid and it has 12% saturated fats. Mustard seeds, like all seeds of the Brassica family, including rapeseed and turnip, have high levels of omega-3 (6–11%) and are a common, cheap, mass produced source of plant-based (therefore, vegetarian) omega-3 fatty acids.

In India, mustard oil is often heated almost to smoking before it is used for cooking; this may be an attempt to reduce the strong smell and taste. However, high heat can damage the omega-3 in the oil, reducing its unique role in health. In Western countries, the oil is sold "for external use only" in stores catering to Indian immigrants, since in North India, mustard oil is also used for rubdowns and massages, thought to improve blood circulation, muscular development and skin texture; the oil is also antibacterial.

The effects of erucic acid from mustard oil on human health are controversial. However no negative health effects have ever been documented in humans. Mustard oil has been considered unsuitable for human consumption in the United States, Canada, and the European Union due to the high content of erucic acid.

There are two ways in which you can get oil which is not harmful: