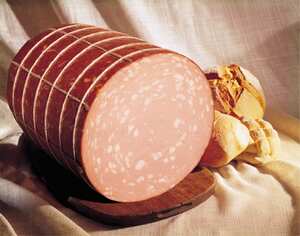 IGP Mortadella Bologna is an Italian product of pork-butchery, generally oval or cylindrical in shape, made from pigmeat; the sausage casings are natural or synthetic and the product is subjected to prolonged cooking. The product is compact in appearance, of unelastic consistency, with a cut surface of velvety appearance and uniform bright pink colour; in the slice there must be, in a quantity of not less than 15% of the total mass, perlaceous white squares of adipose tissue, possibly joined to muscular fragments. Mortadella Bologna possesses specific chemico-physical organoleptic characteristics in accordance with the relevant production regulations.

Proof of origin: The name mortadella is said to date back to Ancient Roman times; according to some claims it is derived from mortarium (mortar), such a device being used to crush pigmeat, as shown in particular by an engraving on a funeral stone on display at Bologna's Archeological Museum; others, however, claim that the word comes from murtada ("seasoned with myrtle", a plant commonly found in Lazio). Either way, the production of mortadella can be ascribed to an area under Roman influence that extends from Emilia-Romagna to Lazio. It is traditional Bolognese cooking's best-known sausage, with certified historical references dating back to the 16th century. There are also numerous references to the designation in Italian literature in later centuries. More recently, there have been references to the designation in bilateral agreements Italy has signed with France, Germany, Spain and Austria on the protection of indications of provenance, designations of origin and other geographical designations reserved for products originating in Italy.

Method of production: The processing oí Mortadella Bologna involves the following stages: preparation of the meat constituents, preparation of the bacon strips, mixing, making into sausages, cooking and cooling. Only striated muscle tissue of swine (not of other animals) and high-quality fat from the throat may be used. Sugar and certain additives may be used, but only in small preset quantities. Protein may not be added,