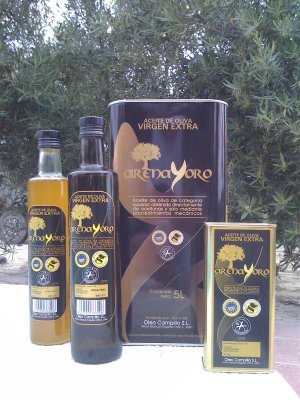 The oils obtained are the result of the joint pressing of principal and secondary varieties. They therefore consist of several varieties and are enriched by the characteristics peculiar to each of those varieties. Among the oil's organoleptic characteristics, the strong flavour of the dominant Picual variety stands out (its green colour, medium to intense bitter flavour and fruity aromas) but this is diluted by the Lucio and Loaime and secondary varieties, which introduce fresh aromas, reminiscent of fruits, and a sweet flavour and more golden tinges.

The extra virgin olive oils produced in the area have a fruity aroma and a flavour that is reminiscent of green or ripe recently pressed olives, slightly bitter and full bodied, whose intensity varies with the degree of maturity of the pressed olive. The acidity level is low and in colour all the different shades of green are present, from a deep green to a greenish yellow.

The lipid composition is marked by a high content in oleic acid which is usually above 80 %, sometimes reaching 83 %. The monounsaturates/polyunsaturates ratio is high (12:20) which means the nutritional properties are excellent. The chemical stability of the oils is high, a quality largely attributable to the components causing the bitter flavour, making them, in contrast to other virgin olive oils, more resistant to oxidation.

The procedure for producing the virgin olive oil, from the olives in the olive groves to the obtaining of the oil, involves the following stages:

Advantage is taken of the rainy season, stretching from autumn to winter, for planting. The seedlings are placed in 50 cm deep casillas (areas of soil worked with the hoe). The layout of a grove depends on its age, in older groves the spacing between trees is 12 m (square planting) and 8 m (triangular planting), the number of scions per tree being two, three or four. In more recent groves, the spacing is 5 m, with a single scion per tree.

The procedures undertaken each year involve:

During the entire production process the olives from the ground and those picked from the trees are processed separately:

Local archaeological remains and bibliographical references to the name, the region and the product testify to olive oil being produced in the area over a long period.

The first reference to ‘terrenos montuosos’ (mountainous terrain) and ‘cultivo del olive’ (olive growing) in the Montes de Granada region dates back to the 16th century. The document in question deals with land allocation and in it is stated ‘… to each neighbourhood a part of the olive grove is also allocated…’. (Peinado Santaella, 1989; La repoblación de la tierra de Granada: Los Montes, Universidad de Granada).

In the 17th century, as narrated by Henriquez de Jorquera in the Granada annals, various factors but essentially the decline in rural population numbers due to the expulsion of the Moors led to a decline in the cultivation of cereals and their replacement by vines and olives. Another bibliographical reference of that time, dating back to 1634, mentions the cultivation of ‘Olivas de Marca’, in reference to trees yielding a rich harvest of high-quality olives (Libro de Apeos de Cogollos Vega, Real Chancillería de Granada). Trees over 500 years old belonging to the Loaime variety, a name of Arab origin, can still be found today (Martínez Robles, 1833; Colmeiro, 1865; PATAC et al., 1954; Ministerio de Agricultura, 1976 b; Barranco y Rallo, 1984).

According to 18th century documents a request was submitted by the province of Granada to the Council of Castile for the clearing of a total of 5,749 hectares. Further, illegal land clearing increased this figure to 14,103 hectares. The cleared land was then devoted for the most part to olive growing, particularly in the Los Montes region, so that in 1799 Granada, with 120,600 quintals, was placed ninth in olive oil production ratings (Liceras Ruiz, 1993).

An important historical document dating back to the middle of the 19th century (Diccionario Geográfico Estadístico e Histórico, Pascual Madoz, 1845, republished by Bosque Maurel, 1987) praises the olive groves of this district and the exquisite flavour of its oil and explicitly refers to: ‘Montes de Granada … and despite the scarcity of drinking water, the waters of the Rivers Cubillas, Benalúa and Moclín are used for irrigating the surrounding land, and all types of cereals, limpid and exquisite oil, wine and seeds of all kinds are produced’.

These references to the Rivers Benalúa and Moclín and to the nearby region of Colomera show that at that time it was in those areas that olive cultivation and, judging by the still-standing 18th and 19th century mills, virgin olive oil production was the most developed. In Colomera, the Molino de Galenos, with its hand-operated system of presses, still stands, and the Molino de La Puente is driven by water power and the Molino de Las Niñas, on the Ruta del Legado Andalusí, by animals.

Finally, it was the period between 1913 and 1933, the so called ‘golden age of olive cultivation in Spain’, that saw the biggest increase in olive plantations and improvements in cultivation practices, leading to the production of high-value extra virgin olive oil. In the 20th century the rate of expansion of the olive groves of Montes de Granada was such that it exceeded by far that of the other Andalusian provinces. Hence, during the Spanish civil war, the area devoted to olive cultivation in this district witnessed an increase of 50 %, with the result that many of its olive trees are around 40 to 50 years old today. In 1957, a decree was issued declaring the conservation of areas under olives to be a matter of national interest, it being a factor contributing to the conservation of agricultural land. In the sixties, the areas in the province of Granada devoted to olive growing increased from 62,202 ha to 118,365 ha, in other words they almost doubled, and in the Montes de Granada area olive groves account for 77,5 % of total utilised agricultural area.

The extreme and distinctive characteristics of this region: relief, soil, climate and river systems make the olive the plant that is best adapted to the harsh conditions.

The landscapes in this region are mostly typical of low mountain ranges where depressions ranging from some 750 to 900 m in altitude alternate with mountain folds stretching from east to west and reaching maximum altitudes of 1,400 to 2,000 m. Hamlets and villages areas are situated at an average altitude of 900 m above sea level. Landforms are generally more rugged in the limestone massifs, and other reliefs, also dissected by scarps, consist of low ridges and hills of limestone, marlaceous lime and loam. Further east, the landscape becomes more gentle, extending to a high plateau at an elevation of 1 200 m which then descends at the eastern end of the region to the valley of the River Fardes. This river forms the natural boundary of the district to the east and from there the relief changes, becoming more typical of the xeric landscape of southeastern Spain.

In terms of soil structure, the los Montes region has a range of complex soil types which means that pure forms seldom occur and that mixtures of several types are more common. The commonest soils are those that have developed from the decomposition of various lithological varieties of limestone. They are rich in marly limestone materials eroded from the sierra and therefore have a high calcium carbonate content (over 40 %). Their structure has been subsequently modified through soil cultivation for agricultural purposes.

The type of climate — Mediterranean continental — is characterised by extremes of temperature, i.e. huge differences between maximum and minimum day and night, and summer and winter temperatures. Average annual rainfall varies between 400 and 600 mm or even less in years of drought. Winters are long and cold, with frequent snowfalls and periods of frost, and summers are long and hot, with extreme temperatures reaching 40° C.