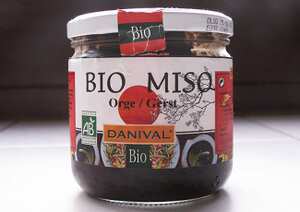 A pot of commercial barley miso

Miso is a traditional Japanese food produced by fermenting rice, barley and/or soybeans, with salt and the fungus kōjikin, the most typical miso being made with soy. The result is a thick paste used for sauces and spreads, pickling vegetables or meats, and mixing with dashi soup stock to serve as miso soup called Misoshiru, a Japanese culinary staple. High in protein and rich in vitamins and minerals, miso played an important nutritional role in feudal Japan. Miso is still very widely used in Japan, both in traditional and modern cooking, and has been gaining world-wide interest. Miso is typically salty, but its flavour and aroma depend on various factors in the ingredients and fermentation process. Different varieties of miso have been described as salty, sweet, earthy, fruity, and savoury, and there is an extremely wide variety of miso available.