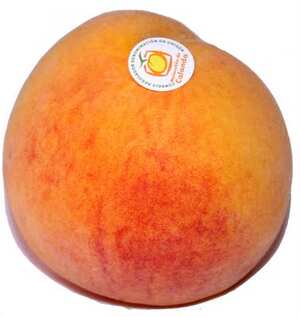 Melocotón de Calanda is a Spanish DOP peach which is grown in the south-eastern part of the Río Ebro between the provinces of Teruel and Zaragoza in Bajo Aragón. The production of this unique fruit is described in medieval documents.

The expansion of peach production began in the 1950s and used the traditional technique of ‘bagging’ of individual fruit whilst on the tree and by the 1980s the peach trees covered almost 3,000 hectares. ‘Bagging’, which takes place between June and July, involves the covering of the fruit in a paraffin paper bag for a minimum period of nine weeks to protect it from pesticides.

The fruit is fleshy and consistent, and has achieved its reputation for its special size, quality and sweetness. It is has a creamy/straw yellow colour.