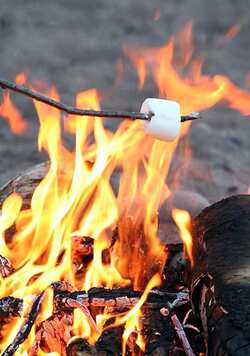 The marshmallow is a type of confectionery that, in its modern form, typically consists of sugar or corn syrup, water, gelatin that has been pre-softened in hot water, dextrose, and flavourings, whipped to a spongy consistency. The traditional recipe used an extract from the mucilaginous root of the marshmallow plant, a shrubby herb (Althaea officinalis), instead of gelatin; the mucilage was originally used as a medicine to soothe sore throats.

Commercial marshmallows are a late-nineteenth-century innovation. Since Doumak's patented extrusion process of 1948, marshmallows are extruded as soft cylinders, cut in sections and rolled in a mix of finely powdered cornstarch and confectioner's sugar (icing sugar). However, not all brands coat their marshmallows sugar.

A popular camping or backyard tradition is the toasting or roasting of marshmallows over a campfire or other open flame. A marshmallow is placed on the end of a stick or skewer and held over the fire until it turns golden brown. This creates a caramelized outer skin with a liquid, melted layer underneath.