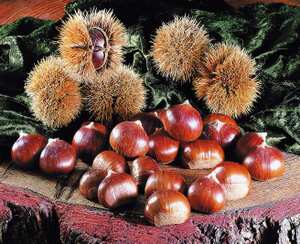 DESCRIPTION: Product size: medium-large size (normally not more than 90 nuts/kg). Prevalently ellipsoidal shape; not very prominent top with the presence of tomentum, terminating in a tuft typical of the species; one lateral face tending to be flat, the other greatly convex; quadrangular-shaped hilar cicatrix (or eye), generally flat, which does not continue onto the lateral faces. Thin, reddish-brown pericarp, with 25 to 30 darker, raised, longitudinal striations. The pericarp is easily detached from the episperm, which is chamois-coloured and which rarely recedes into the larger grooves in the seed. The seed, of which there is normally one per nut, has a meat which is white, crisp and pleasantly sweet flavoured, with a surface almost entirely without grooves.

EVIDENCE OF ORIGIN: In the Middle Ages the Massa, today the town of Castel del Rio, became a trading centre and changed its name to Mercatale (as it was called in some 15th century documents from Imola, but the name certainly goes back to the previous century). At the beginning of the 1600s, Rodrigo Alidosi (1589-1623), lord of Castel del Rio, was able to claim that "every week the best market in Romagna" was held at Castel del Rio. A report on Castel del Rio from 1618 was found recently at the State Archives in Florence, which, among the many and interesting accounts it gives, states: "and there is a Market there every Wednesday, where a great many people from nearby areas come together", "and the Marrons, of which they Export a great number, and most dry them and remove the shell, and sell them with excellent reputation, always something more than for the selling of grain".

The fundamental importance of the growing of marron chestnuts is recalled by several historical accounts, one of the most important being the "Editto sopra l'incisione dei castagni" ("Edict on the Cutting of chestnut Trees") found in the Castel del Rio communal archives, signed in 1694 by the Governor Antonio Maria Manzoni, which replaced and annulled the previous law of 1584 regulating the cutting to be done in the chestnut woods. The edict began: "It being that a great part of the revenues obtained from the territory of Castel del Rio come from the fruit of the chestnut" , and goes on at length on the importance that chestnut-growing had in the local economy in centuries past. Later it was deemed necessary to have a triweekly market in the autumn months in Castel del Rio, the only one in all the towns in the valley above Imola, as shown by documents from as early as the first decades of the 19th century. The building of the Montanara Road along the valley between 1829 and 1889 and the arrival of the railroad helped to spread this product to a wider market in Italy and abroad. To be able to give a number to the size of the area occupied by chestnut trees, it is necessary to arrive at 1885, when the Mayor of Castel del Rio, by request of the Prefect of Ravenna, sent a report on the local agricultural production, from which it can be seen that out of 3900 Ha of cultivated land, 1450 Ha, or 40%, was covered by chestnut groves. In subsequent years chestnuts continued to have considerable importance in the area's economy, with the local historian Giuseppe Fortunato Cortini writing in 1932 "... but the speciality of Castel del Rio is the Marron chestnut, highly prized in foreign markets as well".

ACQUISITION: The environmental cultivation conditions of the chestnut groves for marron production must be the traditional conditions of the area, and in any case suitable for providing the product with the characteristics of the area. The planting distances, forms and pruning methods must be those in general use, with a density between a minimum of 75 and a maximum of 125 trees per hectare. Only those chestnut groves with the proper position and orientation situated at an altitude between 200 and 800 meters above sea level shall be considered acceptable. All forcing practices, all use of chemical fertilizers and the use of pesticides during the productive stage are prohibited. The maximum allowable unitary yield for marron chestnuts is 1500 kg per hectare. Any preserving of the marron for the purpose of extending the marketing period must be done according to traditional methods, and the use of chemical products is prohibited.

LINK: As indicated above, there is a close historical and cultural link between the area and the marron chestnut, such that marron festivals and fairs have taken place since the 1800s. Thus a particular degree of professionalism has been reached which is unique in this sector, with 70% of operators making their income from marrons. Today an area of 550 Ha is occupied by chestnut groves, for a production of approximately 600 tonnes. The importance of this typical product has already been made evident by the financial aid obtained from the European Union through IMP measures. These projects have made possible the recovery, improvement and conservation of chestnut-producing groves and the promotion of the marron chestnut.