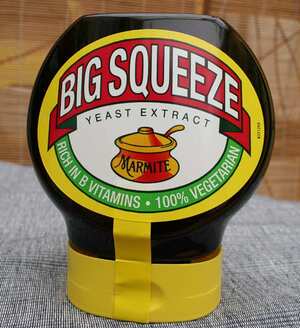 Marmite is the name given to a British food spread. Marmite is made from yeast extract, a by product of beer brewing, and is suitable for vegetarians and vegans.

It is a sticky, dark brown paste with a distinctive, powerful flavour, which is extremely salty and savoury, comparable to soy sauce. This distinctive taste is reflected in the British company's marketing slogan: "Love it or hate it." It is similar to the Australian Vegemite and Swiss Cenovis. Bovril is a similar looking spread made from beef extract.

The image on the front of the British jar shows a "marmite", a French term for a large, covered earthenware or metal cooking pot. The British Marmite was originally supplied in earthenware pots, but since the 1920s has been sold in glass jars that approximate the shape of such pots. A thinner version in squeezable plastic jars was introduced in March 2006.

A recipe for beef tea that precedes Marmite by a five hundred years:

Take a grete glasse and do thi beef therin, and do onyone mynced and whole cloves and maces and pouder of pepur, and lay splinters in the bottom that the flesh hot not and stop it well, that no eyrie goo oute, and seethe hit with an esy fyre- [or] sethe it ina pt with water in a cawdron, but top it well that no erye goo oute.

Other sources of beef tea.