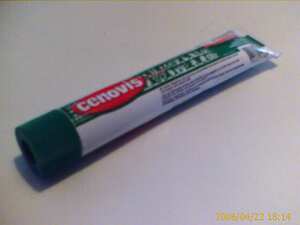 A tube of Cenovis

Cenovis is a product based on yeast extract similar to Vegemite and Marmite, rich in vitamin B1. In the form of a dark brown food paste, it is used to flavour soups, sausages or salads. The most popular way to consume Cenovis is however to spread it on a slice of buttered bread.

Cenovis is popular in Switzerland, where it was developed in 1931 and is produced today by the company Cenovis SA.

The company presents the following story behind Cenovis

In 1931, a brewer recycled the yeast used for the fermentation of beer: vegetal substances very rich in vitamin B1. After several tests, the product was perfected and a group of Swiss brewers launched Cenovis; the product was an immediate success and the famous spread was so good that it was included in the rations for Swiss soldiersâ¦ Healthy and strong soldiers!