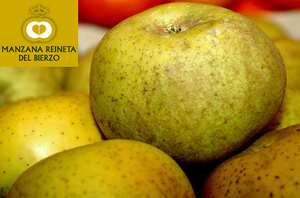 The Bierzo Pippin, (White Pippin and Grey Pippin) are DOP apples produced in Carracedelo and Dehesas in the province of León in Spain.

The apples have superior characteristics to those produced in other areas of the country (probably due to the soil). They are hard, rather than floury and have a good balance of acidity, sweetness and juiciness, with an intense and unique aroma and flavour.

The apples are large fruits, with a characteristic shape, flattish, with a short petiole (the small stalk attaching the leaf blade to the stem) and a closed base. Its flesh is cream coloured and has a dull, green skin, with russeting which almost covers the entire fruit. This can appear unattractive to some, but this does not affect the flavour.

The introduction of the apple in El Bierzo has been linked to colonisation by the Roman Empire, but there are those who believe that religious orders contributed to its introduction. In the Monastery of Carracedo there is a Reineta tree of which there is no knowledge as to its age or who planted it.