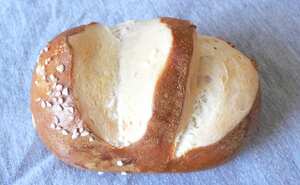 Lye rolls are a baked speciality in Germany (especially in Bavaria and Swabia), Austria, and Switzerland. They are made by glazing bread rolls with a lye solution before baking. The German name is Laugengebäck for any baked good dipped in lye. The perhaps best known shape is the pretzel, while rolls or buns are specifically called Laugensemmel or Kastanie (Bavarian), Laugeweckle, or Laugestängle (Swabian), and Laugenwecken, Laugenbrötchen or Laugenstange (everywhere else in Germany); Laugenweckerl in Austria; Silserli or Laugenbrötli in Switzerland. In some parts of Asia they are known as laugen rolls.

The same lye solution is also used for preparing Brezen; outside of Germany, the pretzel is often the only baked food being commonly glazed with this lye solution. Like those, a good lye roll should be covered with large grains of salt. As a snack, it may also be sold in a variant covered with baked cheese, although this is more recent and less common. Typically the lye roll is cut in half and buttered. In Germany and Switzerland, large soft pretzels are often cut in half, usually buttered, and sold with your choice of cold cuts (salami, ham) and/or cheese.