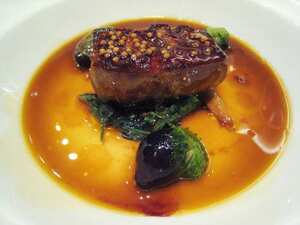 Foie gras (French for "fat liver") is "the liver of a duck or a goose that has been specially fattened by gavage". Pâté de foie gras was formerly known as "Strassburg pie" in English due to that city being a major producer of this food product.

Foie gras is one of the most popular and well-known delicacies in French cuisine and its flavour is described as rich, buttery, and delicate, unlike that of a regular duck or goose liver. Foie gras can be sold whole, or prepared into mousse, parfait, or pâté (the lowest quality), and is typically served as an accompaniment to another food item, such as toast or steak.

The technique of gavage dates as far back as 2500 BC, when the ancient Egyptians began keeping birds for food and deliberately fattened the birds through force-feeding. Today, France is by far the largest producer and consumer of foie gras, though it is produced and consumed worldwide, particularly in other European nations, the United States, and China.

Foie gras is a luxury dish. Many in France only consume foie gras on special occasions, such as Christmas or New Year's Eve réveillon dinners, though the recent increased availability of foie gras has made it a less exceptional dish. In some areas of France foie gras is eaten year round.

Duck foie gras is the slightly cheaper and, since a change of production methods in the 1950s, by far the most common kind, particularly in the US. The taste of duck foie gras is often referred to as musky with a subtle bitterness. Goose foie gras is noted for being less gamey and smoother, with a nuttier flavour.