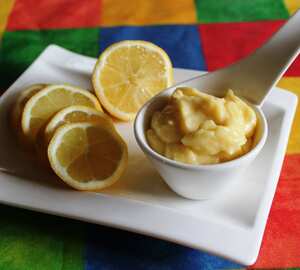 Lemon curd is a dessert spread made with lemons. The basic ingredients are beaten egg yolks, sugar, lemon juice and lemon zest which are gently cooked together until thick and then allowed to cool, forming a soft, smooth, intensely-flavoured spread. Some recipes also include egg whites and/or butter.

In late 19th and early 20th century England, homemade lemon curd (also known in the UK as lemon cheese) was traditionally served with bread or scones at afternoon tea as an alternative to jam, and as a filling for cakes, small pastries and tarts.

Modern commercially made curds such as Gales Lemon Curd are still a popular spread for bread, scones, toast or muffins. Lemon-meringue pie, made with lemon curd and topped with meringue, has been a favourite dessert in Britain and the United States since the nineteenth century.

Curds are different from pie fillings or custards in that they contain a higher proportion of juice and zest, which gives them a more intense flavour. Also, curds containing butter have a smoother and creamier texture than both pie fillings and custards; both contain little or no butter and use cornflour or flour for thickening. Additionally, unlike custards, curds are not usually eaten on their own.