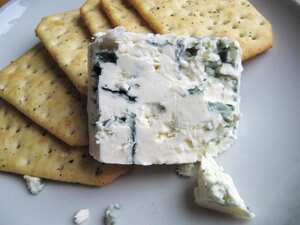 Lanark Blue is a raw ewes' milk cheese from Lanarkshire.

Produced at Ogcastle near to the village of Carnwath by Humphrey Errington since 1985, it is a rich blue-veined artisan cheese. Made from the cheesemaker's own flock's produce, it is one of the first blue ewes' milk cheese produced in Britain since the Middle Ages. It is suitable for vegetarians.

It is ivory-white, with blue-green veins and the white rind has some blue and white mould on it. Using penicillium roqueforti, to create the veining, it has a strong flavour that varies according to the time of year that the cheese is made.

The curd is placed moulds and dipped in brine. It is then un-moulded and allowed to age for 1 month. It is then wrapped in foil and then aged for 2 further months, during which period it is turned 6 times. It then has its foil removed, is scraped, and is cut into half-moon wedges 10 cm tall, and weighing 1.5 kg. The wedges are wrapped in fresh foil for packaging. Retailers generally sell the cheese in 250 g wedges.

A white variety of the cheese is also available.