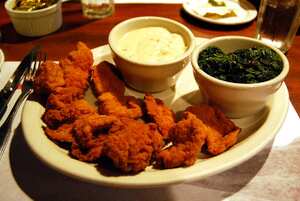 Lamb fries is the name generally given to lamb animelles (testicles) that have been peeled, rolled in cracker meal, fried, and served as food. They are otherwise known as lamb "balls." Lamb fries are often incorrectly confused for Rocky Mountain oysters. Lamb fries are served in many Italian restaurants, particularly in Oklahoma's "little Italy" located in Krebs, Oklahoma and Cattlemen's Steakhouse in the Oklahoma City Stockyards.

Lamb fries, often served in a cream gravy, are a traditional dish in the Bluegrass region of Kentucky.

In Australia, the United Kingdom and other nations once a part of the former British Empire, lamb's fry is a lamb's liver. Normally these are cooked with bacon or onions and a gravy made with the juices. They were once very popular in pubs as low cost meals ("bar meals").

In Lancashire, lamb's fries are testicles not liver.