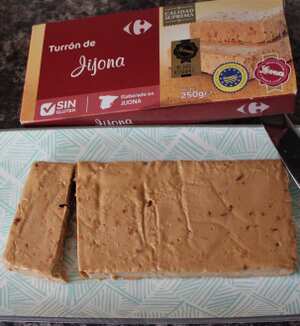 IGP Jijona is a Spanish nougat consisting of a mix of almonds, pure honey and sugars in specified proportions. Classed as "Supreme" and "Extra".

Geographical area : The municipality of Jijona in Alicante province; raw materials may come from Alicante, Castellón and Valencia.

Evidence of origin : The processing factories, duly registered with the Regulating Body, manufacture and package the nougat in set conditions, under Regulating Body control.

Acquisition : Nougat made with a sugar and honey mix cooked at high temperature for at least 30 minutes to the desired point, after which it is spread in sheets on cooling surfaces. When cold it is kneaded and refined until a plastic mass is obtained. The mass is placed in recipients where peeled, roasted and chopped almonds are added, and cooked a second time in the "Boixet" for not less than 150 minutes until the desired compactness is attained. While still warm the mass is weighed, formed into shapes without being covered with wafer, and cut for packaging.

Link : The abundant almond crop in the area, favoured by the mild climate, and the abundance of honey in the Mediterranean area make for a product linked to local produce and processing techniques.

Gastronomy : IGP Jijona must be stored in a cool dry place. Once it has been opened, it should be kept in its original wrapping or in aluminium foil. IGP Jijona is not only eaten at Christmas but is also used as an ingredient in the preparation of very special dishes. It can be used in fish dishes such as salmon or be the main ingredient in biscuits, cakes, ice cream, mousses and desserts in general.