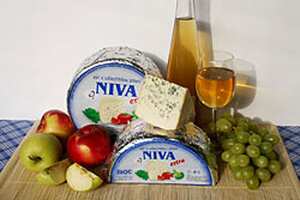 The basic raw material used in production of this natural CZO cheese containing mould is dairy processed cows' milk. The cheese is made exclusively from milk from the designated area.

the cheese are not signs of flaws. The surface of the cheese can be creamy to light brownish in colour.

Geographical area The geographical area is the South Bohemia region whose borders are demarcated by Act No 36/1960 Coll. on the Territorial Division of the State, as last amended.

Dairy processed milk with a fat content of 5,35 % is filled into the cheese-making machine and commonly used cultures, which ensure good acidification of the cheese over the entire production and ageing processes, are added. The characteristic taste of Jihočeská Zlatá Niva is imparted by cultured Penicillium roqueforti mould which has been used for decades (the culture stock is generally available for use in the food industry). After the rennet has been added and milk curdled, the resulting grains of cheese are put into wheel-shaped forms. Whey is drained off and the micro-flora culture developed at a restricted temperature.

The cheese is salted in two phases: first in a saltwater brine and then by rubbing with large-grain salt. In the past, ageing took place only in natural ageing cellars that were hollowed out of limestone rock. In 2005, due to the increase in production of this blue cheese, air-conditioned ageing cellars equipped with temperature and humidity controls were built. The cheese ages in the cellars for at least six weeks. The surface of the ripened cheese is washed or scraped, and then the cheese is packed in aluminium foil. The packaging must be intact, clean and properly marked.

In view of the biotechnological nature of the product, the blue cheese must be packed directly at the production facility. This is also necessary to maintain product quality, hygiene and cleanliness, to prevent the cheese from being confused with cheese from a different region and, last but not least, to allow better traceability of the product.

Blue cheeses have been produced at the Český Krumlov plant using the same production method since 1951. Production of blue cheeses with 60 % fat content in dry matter started in Český Krumlov a few years later than production of blue cheeses with 50 % fat content. The cheese is named after the meadows and pastures of Šumava, where the main ingredient comes from — cows' milk delivered to the Český Krumlov plant from South Bohemia, particularly from the foothills of Šumava. The milk is from one of the least polluted regions. The pastures are located in the protected areas of Novohradské Hory, Blanský les and Šumava, and the area's unique flora has a positive influence on the taste of the milk.

These pastures offer a wide variety of flora specific to the region. Short-stalked plants (nard, fescue, etc.) with high varietal diversity are characteristic alongside certain rare varieties typical of the area. One special endemic plant is Phyteuma nigrum. Other special features include Gentiana pannonica, Ligusticum mutellina, Arnica montana, Gentianella praecox subsp. Bohemica, certain types of terrestrial orchids, etc. This varied, rugged terrain is characterised by its very clean environment, particularly the Český Krumlov region and foothills of Šumava (Unesco Biosphere Reserve declared in 1990). As proof that the South Bohemian natural environment is highly valuable, a large number of officially protected landscapes have been declared, two of which are protected by Unesco. Of course, local people's experience with producing this blue cheese, handed down from generation to generation, has also had a major influence on the quality and properties of Jihočeská Zlatá Niva.