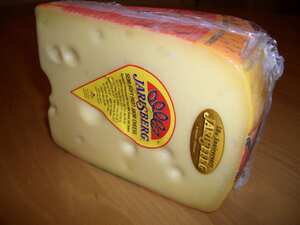 Jarlsberg cheese is a mild cows' milk cheese with large irregular holes, originating from Jarlsberg, Norway. It has a yellow-wax rind and a semifirm yellow interior. The flavour is mild, buttery, nutty and slightly sweet. It is an all purpose cheese, good both for cooking and for eating as a snack. It has a characteristic smooth, shiny-yellow body, and a creamy supple texture. Jarlsberg Special Reserve is produced in Norway in limited quantities. It is aged a minimum of one year and is distinguished by medium to large holes.

The history of this cheese can be traced back to the middle 1850s. Its creator, Anders Larsen Bakke (1815–1899), was a farmer and entrepreneur and a pioneer in Norway's dairy industry. He produced the cheese in the Våle village in what was then the county of Jarlsberg and Larviks Amt (now Vestfold), 80 km south of Oslo. The cheese shares similarities with swiss cheese, introduced to Vestfold by Swiss cheesemakers. The cheese (and Bakke's accomplishments) was first noted in the annual county report of Jarlsberg and Larviks Amt 1855.

Production was discontinued in the early 1900s, and the cheese was only re-invented by professor Ola Martin Ystgaard of the Agricultural University of Norway. Starting in 1956, Ystgaard and some of his students tried to recreate the cheese and eventually came up with the recipe that is used today. Commercial production of cheese began in the 1960s.

Jarlsberg is an excellent substitute for Emmenthal.