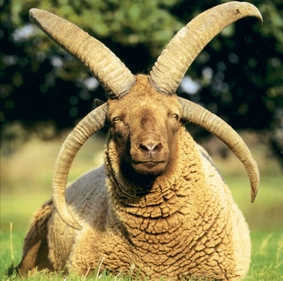 This is a Loaghtan PDO sheep, registered with the Breed Society, which have been born, raised and slaughtered on the Isle of Man. The meat is fine grained, less fatty and darker than meat from more commercial breeds. It has a distinct, gamey flavour. Dressed carcase weights range from 13 kg at 6 months to 18 kg at 15 months.

The link to the geographical area can be demonstrated as follows:

The breed is thought to have been descended from those introduced in prehistoric times, from the flocks of the native Celts, or from flocks brought to the island by the Vikings. Sheep farming has been long established on the island. One of the earliest written records shows that in the year 1376 Irish invaders defeated Manxmen in a battle and seized large numbers of sheep from Rushen Abbey. Subsequent historical references refer to the breed with respect to both its wool and meat. For example, in 1794 Basil Quayle writes that ‘the ancient flocks are small and hardy, their usual weight is from five to eight pounds a quarter, the meat being particularly good’.

At the end of the 18th century a decline in the Manx Loaghtan breed was linked to social and economic factors, however, a revival came over the course of the 20th century as popularity of the breed increased as sheep farmers on the island recognised how adaptable the native breed is to the unique climate and geography of the Island. This renewed interest in the breed has been mirrored by consumers. To comply with the Sheep and Goats Identification Order 2000, all sheep sent to the meat plant must be marked with a designated flockmark and accompanied by documentation which provides information which identifies the holding of departure, the date of movement and number of animals. It also records flock marks, or individual identification numbers, which have previously been applied to each animal and is then signed by the owner or agent. It is possible for the origin of each carcass to be traced at the destination by reference to these labels. In addition the Breed Society issues tags to the registered producers which are then attached to the sheep. The sheep are sent to the abattoir with their tags intact, a list of tag numbers accompanies them. After slaughter, a ticket, with the original tag number is attached to the carcass by the Government meat grader. The carcass is then delivered to the customer with details of the registered producers tag number. Audit procedures provide 100 % traceability.

On the Isle of Man, Manx Loaghtans are reared on farms practising traditional forms of husbandry. Loaghtans thrive on poorer land, which has been basically left to nature — unimproved pasture, gorse and bracken scrub, and heather moorland and are markedly different in size and conformation from the same breed of sheep reared on fertilised, lowland grass pastures in the UK. In the early months of the year, feed supplements may be fed, with preferences given to the use of locally produced grain. Manx Loaghtans are very hardy and thrive in the damp, maritime climate of the Isle of Man where, although the mean winter temperatures are not extreme, gale force winds are common throughout the year. Lambing is unassisted by human intervention and takes place between February and May.

The Breed Society issues tags to the registered producers which are then attached to the sheep. The sheep are sent to the abattoir with their tags intact, a list of tag numbers accompanies them. After slaughter, a ticket, with the original tag number is attached to the carcass by the Government meat grader. The carcass is then delivered to the customer with details of the registered producers tag number. The lambs are slaughtered at between 6-15 months of age. It is required to take place at the EU approved, abattoir on the island. The abattoir is government owned but run by a producer cooperative, The Fatstock Marketing Association. In view of the small geographical size of the Isle of Man, no animal is further than 30 minutes travelling time from the abattoir. Carcass hanging time is a minimum of one week at the abattoir. Marketing takes place via the Manx Loaghtan Marketing Cooperative Ltd. Manx Loaghtan Lamb is sold as whole carcass to local wholesalers and also exported.