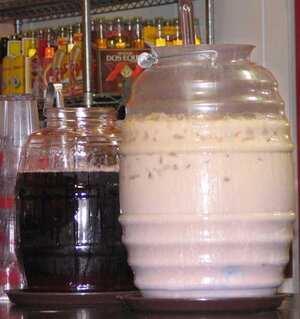 Two large jars of aguas frescas in a taquería in Seattle, Washington, USA. On the left is a jar of jamaica and on the right is a jar of horchata.

Horchata or orxata is the name for several kinds of vegetable beverages, made of ground almonds, sesame seeds, rice, barley or tigernuts (chufas).

In Spain, it usually refers to orxata de xufes (horchata de chufas), made from tigernuts, water and sugar.

Originally from Valencia, the idea of making horchata from tigernuts comes from the period of Muslim presence in Valencia (from the 8th to 13th century).

It has a regulating council to ensure the quality of the product and the villages where it can come from, with the Denomination of Origin. Classics get an A. The village of Alboraia is well known for the quality of their horchata.

It is served ice cold as a natural refreshment in the summer. Tigernut horchata is also used in place of milk by the lactose intolerant. While in some countries the drink is usually tan and "milky", some recipes call for milk, and others do not. Other ingredients often include sugar, cinnamon, and vanilla. Though horchata was once typically homemade, it is now available in both ready-to-drink (shelf-stable or refrigerated) and powdered form in grocery stores.

In the US, rice-based or morro horchata is served in many Mexican restaurants, and the horchata de chufas (tigernut) is virtually unknown. Rice-based horchata is also sometimes available in US grocery and convenience stores, especially in Latino neighborhoods.

Horchata, together with tamarindo and jamaica, are the three typical drink flavours of Mexican aguas frescas.

The horchata found in El Salvador is often made of a mixture of herbs, not rice. The horchata is typically flavoured with morro seed (from the calabash, a variety of squash), ground cocoa and cinnamon as well as sesame seeds, and in some cases is strained.

In Nicaragua and Honduras horchata refers to the drink known as semilla de jicaro, made from the jicaro seeds (another name for the morro seed) ground up with rice and spices. The drink is made with cold milk and sugar and is very popular nationally. Recently Nicaragua has begun exporting this product primarily to the United States.