Guineafowl, sometimes called Pintade, are a family of birds originating from Africa, related to other game birds such as the pheasants, turkeys and partridges; they have a long history of domestication, mainly involving the Helmeted Guineafowl. 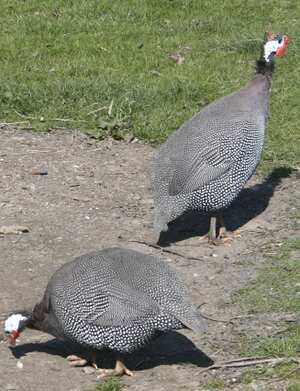 They lay 25–30 eggs in a deep, tapering nest. Their eggs are small, dark and extremely thick-shelled. The hens have a habit of hiding their nests, and sharing it with other hens until large numbers of eggs have accumulated. The incubation period is 26–28 days, and the chicks are called "keets". As keets, they are highly susceptible to dampness (they are indigenous to the drier/arid regions of Africa) and can die from following the mother through dewy grass. After their first two to six weeks of growth, though, they can be some of the hardiest domestic land fowl.

Sexing the birds is not as simple as telling a rooster from a hen chicken. When they are adults, the helmet and wattles of the male are larger than those of the female, and only the female makes the two-note cry imitated as "Buck-wheat!" or "Pot-Rack!" Aside from that, though, the two sexes are mostly identical in appearance.

As domestics, guineafowl are valuable pest controllers, eating many insects. They are especially beneficial in controlling the Lyme disease-carrying deer tick, as well as wasp nests. While they are rarely kept in large numbers, a few are sometimes kept with other fowl to be used as a security system against birds of prey. They will call with their loud, high shrieking voices if concerned about intruders. They are highly social birds and tend to languish when alone. Within the domesticated species, many colour variations have been bred forth aside from the "pearl" or natural colour of the Helmeted Guinea. These include White, Purple, Slate, Chocolate, Lavender, and Coral Blue, Bronze, Pewter, Buff Dundotte, Blonde, and various Pieds.

It can be cooked using any recipe that calls for chicken, but is considered to be more flavourful and, because of its higher cost, is generally served at special occasions. It is particularly common in French and Italian recipes.

Guineafowl is at its best and in season during the following months: September, October, November, December January & February.