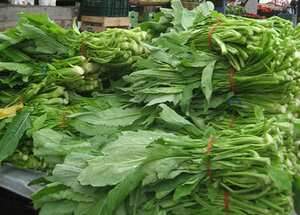 The product protected by the IGP ‘Grelos de Galicia’ is the vegetative part, destined for human consumption, of plants of the species Brassica rapa L. var. rapa (commonly known as the turnip), from the variety groups corresponding to the Santiago and Lugo ecotypes, and the registered commercial varieties ‘Grelos de Santiago’ and ‘Globo blanco de Lugo’, which represent these two ecotypes and are sold fresh, frozen and preserved.

The morphological characteristics of the plant are the following: taproot, with a swollen upper part which is joined to a straight stem branching from the neck. Petiolated, hairy lower leaves, with small, broad lateral lobes, which become larger at the top. Upper flower spike leaves of an oblong spear shape, with two large rounded auricles, hairless and embracing the stem (amplexicaul).

The designation ‘grelos’ is used indiscriminately to mean the leaves and vegetative stems gathered throughout the life cycle of the plant, called ‘nabizas’ (turnip greens), and the leaves and flower spikes obtained immediately before flowering, known in many parts of Galicia as ‘cimos’.

Fresh turnip greens will be marketed in uniform batches in line with origin and variety, using traditional bunches weighing approximately 0,5 kg or 1 kg, tied up with vegetable stems or other materials authorised in the Quality Manual. Frozen turnip greens will be graded, washed, scalded and in some cases cut into pieces prior to freezing, and will be packaged in containers of weights and made from materials authorised by current legislation and explicitly laid down in the Quality Manual.

The preserved turnip greens will be processed naturally, adding only the cooking water and salt to the covering liquid, with no acidification, and will be put up in tins or glass jars of weights authorised by current legislation and explicitly laid down in the Quality Manual.

Turnip greens are not consumed raw. To render them edible, they must be cooked for a period which varies depending on their phenological development. Therefore the organoleptic characteristics refer to turnip greens that are ready for consumption, in other words cooked, either by consumers or by the processing industry. These characteristics include: an intense green colour, which darkens as the plant gets ready to flower; slightly acid and rather bitter taste; slightly fibrous texture, more accentuated if the variety has narrow leaves with a large percentage of petioles; rather soft because of the low fibre content.

The production area covers all the municipalities in the Autonomous Community of Galicia. The area of preparation and packing is the same as the area of production.

All legal and natural persons, owners of property entered in the registers, plots, stores, processing undertakings and products will be subject to inspections and checks carried out by the inspection body with a view to verifying that the products with the IGP ‘Grelos de Galicia’ comply with the requirements laid down in the specification and Quality Manual.

The seed to be used must come from plants of the Santiago and Lugo ecotypes, both those corresponding to the authorised commercial varieties ‘Grelos de Santiago’ and ‘Globo blanco de Lugo’ and those from their respective variety groups arising from the re-use of the same land or from other parcels entered in the Register of Plantations of the IGP ‘Grelos de Galicia’. The seed is sown broadcast from the middle of August, with the date varying depending on the area and earliness of the variety. Harvesting is carried out manually, preferably at times of the day when the temperature is lower. The plants require very careful handling to prevent damage to the leaves which affects their appearance and also forms a potential entry point for disease-carrying microorganisms.

The product may also be harvested using mechanical means when it is to be processed subsequently. On the same day as harvesting, taking great care not to damage the product, the turnip greens are sent to the store for handling or to the processing undertakings as the case may be. Processing and packaging of turnip greens must be carried out within the defined geographical area because of the delicate conditions under which the product must be handled and preserved after harvesting. These operations must be conducted within the defined geographical area so as to:

The inclusion of turnip in crop rotation is documented in the 13th century in various municipal texts and sales documents relating to ‘turnip’ farms. Such rotation made it possible to exploit land fully by alternating a summer cereal crop with turnip and with a winter cereal crop.

Turnips are suited to damp climates and moderate temperatures, and are resistant to frost. They also require fertile soil that has high organic matter content and is of average consistency, deep and loose, and well-drained but with high relative humidity. These weather and soil conditions are found in large parts of Galicia. Turnip greens are an essential ingredient in some of the most typical Galician dishes such as ‘Caldo’ or ‘Pote gallego’, ‘Cocido’ and ‘Lacón con Grelos’, and they are the element which distinguishes Galician cuisine from that of other regions.

Historical and gastronomic references to this vegetable are numerous and point to its strong influence on Galician culture. Various ethnographic and food writers have unanimously highlighted the presence and specific nature of turnip greens as a mainstay of traditional Galician cuisine. References can be found, for instance, in the writings of Ramón Otero Pedrayo, the famous writer who wrote on a variety of subjects (Guía de Galicia, 1926), the food critic, Ángel Muro (Almanaque y conferencias culinarias, 1890-1905), and the novelists Emilia Pardo Bazán (La cocina española antigua, 1912), Manuel María Puga y Parga (La cocina práctica, 1905) and Álvaro Cunqueiro (A cociña galega, 1973). Finally, this product is mentioned as a typical Galician vegetable in the Inventario Español de Productos Tradicionales (Spanish inventory of traditional products) published in 1996 by the Ministry of Agriculture, Fisheries and Food.

For turnip greens marketed under the IGP ‘Grelos de Galicia’, the commercial label corresponding to the trade mark of each producer/packager should be featured under the certification. They will also carry a specific label bearing the geographical indication, a sequential alphanumeric code authorised and issued by the inspection body, and the official logo of the IGP.

Both the commercial label and the specific geographical indication label must bear the words “Indicación Geográfica ProtegidaGrelos de Galicia”. The label may, optionally, indicate the phenological state of the plant, distinguishing between ‘nabizas’ and ‘cimos’, as stated in the product description section.

Moreover, with regard to turnip greens subjected to different processing procedures from those laid down in the specification, authorisation may be granted to state on their labels that they are prepared with turnip greens bearing the IGP ‘Grelos de Galicia’ provided that the raw materials comply with the requirements in the specification and the relevant rules laid down in the Quality Manual