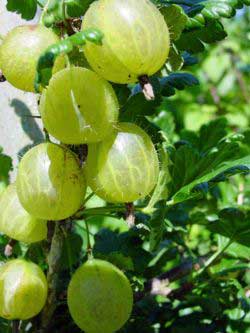 The gooseberry Ribes uva-crispa is a species of Ribes (as is the redcurrant and the blackcurrant) that is native to Europe, northwestern Africa and southwestern Asia.

The gooseberry is another fruit that was more often 'home grown' than purchased from the greengrocer. It has a sharp tart flavour which is very well suited to sauces for pork, duck and mackerel and recipes such as gooseberry fool.

Late in the season, when they are fully ripe, they are sweet enough to eat uncooked.

Gooseberries are at their best and in season during the following months: June & July.