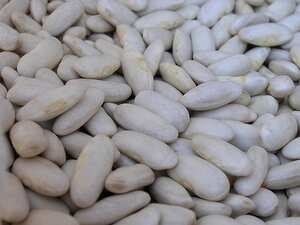 The product covered by IGP Faba de Lourenzá is the ‘Faba Galaica’, a Spanish variety of bean (‘faba’) of the species ‘Phaseolus vulgaris, L’, belonging to the Fabaceae or Leguminosae family, dried, separated from the pod, unblemished, whole, clean and intended for human consumption.

Genetically, the Faba Galaica is an Andean variety of the species ‘Phaseolus vulgaris’. For international trade purposes, it is classed under ‘Favada’.

It has the following characteristics:

— colour: plain white all over

The ‘Faba Galaica’ has qualities that distinguish it from other beans and make it highly sought after by consumers. It has outstanding culinary qualities, with a low percentage of skin (8-10 %) and high water absorption capacity (over 100 %). When cooked, the beans remain whole — they do not split or disintegrate. The texture is smooth and creamy and the skin is so fine that it can barely be distinguished from the rest of the bean.

The beans are grown, prepared for sale and packed in the same area. This covers the coastal territory of the province of Lugo, a natural district known as A Mariña Luguesa, divided into three administrative districts: A Mariña Occidental, A Mariña Central and A Mariña Oriental, which include the municipalities of: Alfoz, Barreiros, Burela, Cervo, Foz, Lourenzá, Mondoñedo, Ourol, A Pontenova, Ribadeo, Trabada, O Valadouro, O Vicedo, Viveiro and Xove.

The area contains a series of valleys enclosed by mountains which run from north to south. The soil is rich, deep, well-drained and medium-textured and the climate is greatly influenced by the topography and the proximity to the sea.

Only beans, dried and separated from the pod, of the ‘Faba Galaica’ local variety of the species ‘Phaseolus vulgaris, L’, grown from certified seeds, approved seeds produced by the same grower or seeds from other fields listed in the inspection body's register can be covered by the Faba de Lourenzá IGP.

The land is prepared for sowing by being worked two or three times in cross pattern with ploughs, harrows and rotovators. Fertiliser is applied at this stage so that the land will be in the best possible condition. The use of manure from local farms is still an important factor in the production process.

The seeds are sown from May to June at a depth of 2 to 5 cm.

To grow Faba Galaica the land needs to be prepared with the appropriate support structure to allow the plant to develop properly. That support will depend on the cultivation method chosen:

— monoculture: stakes made of wood or other materials, linked with taut wire or rope, with twine or netting stretched across the spaces

— maize and beans grown together: the maize provides the support.

Pests and diseases are combated by:

— disinfecting the support structures and the soil before the seeds are planted, in plots with a history of red spider problems

— carefully watching the crop in the first stages of its development

— planting in a pattern to ensure proper ventilation

— when watering, not allowing water to pool and avoiding the soil becoming compacted

— establishing crop rotation, to avoid the spread of diseases which are difficult to control

— not sowing too early

When applying any kind of treatment to the fields, the following rules will generally be observed:

— the minimum possible number of treatments should be applied, in the doses recommended by the manufacturer

Watering will be frequent and evenly distributed, but light in order to prevent the formation of puddles. In any event, as far as possible, it will be done in such a way as to avoid plant health risks.

The beans will be stored in cool, dry places which meet the required hygiene and health standards.

Before being packed the beans are cleaned, sifted, and sorted. They are then treated for weevils by being put in refrigerated chambers for at least 48 hours at a temperature of minus 20 °C or less. No chemicals are used to preserve the product.

The beans put on the market will be classed as ‘extra’ or ‘first’ class in accordance with the quality standard for dried vegetables approved by the Order of 16 November 1983. The packaging must be new, clean and made of material which allows the product to be properly ventilated, preserved and transported. The beans are normally packed in 0,5 kg and 1 kg packages.

Beans are a very important crop in this area and they are widely referred to, for example in works such as ‘Descripción económica del Reyno de Galicia’ (Lucas Labrada, 1804), ‘Historia fin de siglo. Descripción geográfica e historia de la provincia de Lugo’ (Antonio Correa Fernández, 1900) and ‘Geografía del Reino de Galicia’ (Carreras and Candi, 1936). Material in the archives at Vilanova de Lourenzá relating to the weekly market and monthly fair shows that this was an important crop in the district. At the beginning of the 1960s there was a sharp increase in bean production in the district of La Mariña Luguesa, especially in the municipality of Vilanova de Lourenzá. This was when the beans started to be known more widely on the market as Fabas de Lourenzá, and they are referred to as such in various gastronomic guides. The importance and popularity of this crop in the area led to the first ‘Festa da Faba de Lourenzá’ in 1991. This now takes place every year in the first week of October and has been listed as a tourist attraction by the Xunta de Galicia.

The valleys where the Faba de Lourenzá is grown are an optimal natural environment for growing beans in general, and particularly for the ‘Faba Galaica’ variety. In addition to having deep, rich, welltrained, medium-textured soil (sandy or silty loam soil), the climate is especially suitable, with mild, wet summers (in Lourenzá, average temperatures of 13,6 °C in May and 17,0 °C in September) with small variations in temperature between day and night and from one day to another. These conditions have a fundamental impact on the quality of the product. The beans are shiny with a thin skin and soft flesh and have a pleasant texture and taste. They are highly valued by consumers and fetch higher prices on the markets than other dried beans.

In addition, this is a local variety of bean which has been grown from time immemorial by farmers in the district of A Mariña Luguesa, who have developed it by choosing the best seeds from each harvest.

The local farmers have been selecting and tending the best plants in the time-honoured way for generations, while adapting their production techniques to local conditions. This has resulted in a product which is very strongly linked to the local environment and has excellent organoleptic qualities.

The close association between the Faba Galaica and the defined production area has been noted in a study by the Consejo Superior de Investigaciones Científicas (CSIC), which concludes that the commercial quality of these beans (especially their water absorption capacity and the low percentage of skin) is much higher when they are grown in the defined production area than when grown in other neighbouring bean-growing areas.