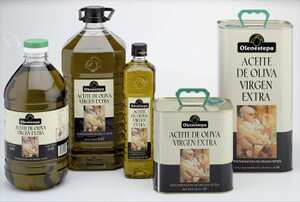 This oil is made from at least 50 % of extra virgin olive oil of the Hojiblanca variety, between 20 and 30 % of the Arbequina variety and up to 5 % of the other varieties (Manzanilla, Picual and Lechin de Sevilla). This type of oil has the fruitiness of green rather than ripe olives with a medium intensity. It has the bitterness and spiciness characteristic of oils obtained at the beginning of the season.

This type of oil has aromas and flavours of fresh and/or ripe fruits and the fruitiness of from green to semi-ripe olives. It has the bitterness and spiciness characteristic of oils obtained at the beginning of the season.

This oil is 100 % extra virgin olive oil of the Hojiblanca variety. This type of oil has aromas and flavours of fresh and/or ripe fruits and fresh grass and the fruitiness of green olives. It has the bitterness and spiciness characteristic of oils obtained at the beginning of the season.

Most of the groves are planted 12 × 12 in the traditional, staggered pattern. New intensive groves have much higher densities and therefore much smaller planting patterns. Fertilisation is carried out in winter, after the harvest. More intensively planted groves have generally led to an increase in irrigation. Irrigation systems are in almost all cases localised systems. The shape of the olive trees is a result of the types of pruning used, known as goblet pruning and rational pruning, which involve removing large cuts of wood from the trunk. The authorised plant-health products must not harm useful fauna and leave no residues in the olives.

The olives are harvested with care directly from the tree using the traditional methods of beating with poles, hand picking or vibration. The fruit is always transported in bulk in trailers or rigid containers. The olives are then pressed at registered mills within 24 hours of harvesting. Preparation involves the following stages: cleaning and washing the olives; pressing; beating the paste; phase separation; decantation; storage in tanks until packing; transportation in bulk and packing.

A large number of olive groves are planted on limey soil, a soil that, by its action on the trees, is better at preventing them taking up iron. The soil is also much better at retaining water, which means that during dry periods plantations on this type of soil are moister. This creates a particular type of grove with its own characteristics and hence oils that are clearly different and characteristic.

Studies show that this type of soil promotes a higher concentration of antioxidants that are of particular interest from the point of view of nutrition, i.e. tocopherols, and particularly α-tocopherol, which is present in higher proportions (> 95 %). Another factor that influences the characteristics of the oils is the local climate, in that the water stress caused by the scarcity of water in the area gives the oil a more pronounced bitterness than is found in oils obtained from olives grown elsewhere. The low rainfall also increases the levels of natural antioxidants.

— are richer in phenolic compounds

— are found to be more bitter in organoleptic tests, a characteristic of oils produced at the beginning of the season

— have a greater concentration of pigments, specifically chlorophylls and carotenes