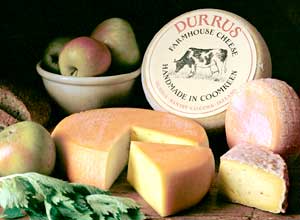 Durrus is a washed rind cows’ milk cheese which was invented by Jeffa Gill in 1979, and is made using traditional methods. It is produced in the valley of Coomkeen, on the Sheep's Head Peninsula in the southwest corner of Ireland, where local herds provide the unpasteurised milk needed to make it.

The cheese is round and semi-soft. It has a pale interior with a pinkish, yellow-grey rind. It is matured for 3 to 5 weeks to allow the flavour to develop. It has a mild and creamy taste that becomes stronger and fruitier as it ages. The aroma is mild to strong, depending on age.

If the Durrus cheese is not listed below, select a similar type of cheese from the list below to get a rough idea for the number of calories in Durrus cheese.