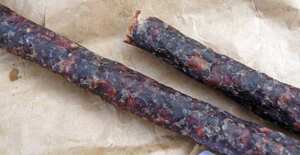 Droëwors (Afrikaans "dry sausage") is a popular South African snack food, made by drying the traditional, coriander seed spiced boerewors sausage. It is usually made from dunwors ("thin sausage") rather than dikwors ("thick sausage"), as the thinner sausage dries more quickly and is thus less likely to spoil before it can be preserved. If dikwors is to be used, it is usually flattened to provide a larger surface area for drying.

The recipe used for these dried sausages is similar to that for boerewors, though pork and veal are usually replaced by beef, as the former can go rancid when dried. Drying makes the sausage less desirable for cooking (as it tends to be less succulent), but ideal for storage.

Droëwors is unusual among dried meats in being dried quickly in warm, dry conditions, unlike traditional Italian cured salami, which are dried slowly in relatively cold and humid conditions. A further difference is that droëwors is made from the normal frying/cooking sausage (boerewors), and therefore does not have the same content of curing agent that is found in a traditional cured sausage. A direct result of this is that droëwors should not be kept in moist conditions as mould can begin to form more easily than would happen with a cured sausage.