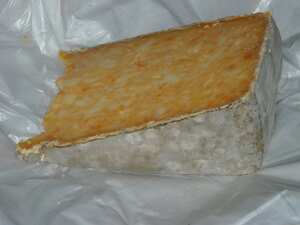 Double Berkeley is a pasteurised cows’ milk cheese produced by Charles Martell on his farm in Dymock. Historically, this name was given to Double Gloucester, because Double Gloucester was traditionally made in the Vale of Berkeley.

Made with animal rennet, the cheese is distinguished by its mottled appearance, the orange parts being due to the addition of annatto. It has a fudgy texture and a sweetish flavour. The grey spotty rind is a natural mould that grows on the cheese during maturation.