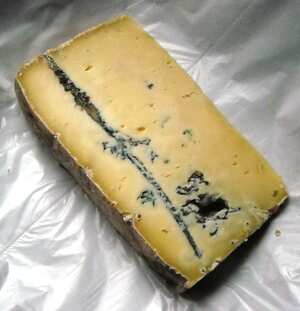 Cornish Blue is produced by The Cornish Cheese Co near Liskeard and has been in production since 2001.

It is a vegetarian, hand-made, pasteurised, cows' milk cheese which is dry salted by hand before being left to mature for between 12 and 14 weeks. The blue veins are made by piercing the cheeses each week with stainless steel rods, allowing them to air thus helping the blue mould spread throughout. The flavour is very soft, mellow and sweet.

The cheese is designed to be eaten young and is available in supermarkets. It can also be bought directly from the producers in truckles of 1kg, 2kg, or 5kg

In November 2010, Cornish Blue was chosen as the World Champion Cheese at the World Cheese Awards in Birmingham and in 2011 and 2012 it was awarded Bronze Medal at the British Cheese Awards.