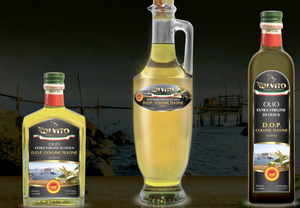 The production area of "Colline Teatine" DOP olive oil on is located within the province of Chieti.

The name "Teatino" derives from "Teatum", which was the ancient name of the town of Chieti. The growing of olives in the province of Chieti goes back to very ancient times. Evidence of this is provided by the remains of an ancient olive mill which can be traced back to the 2nd century A.D. The recent discovery in this area of an ancient Roman-Byzantine settlement has made it possible to write an informative history on the productive culture of the area, especially in relation to the growing of olives and grapevines. In more recent times and in a more scientific manner, an illustration of the presence and the growing of olives in the province of Chieti is given in the Report of the royal envoy Giuseppe Maria Galanti from the year 1792. Currently, following the rationalisation of production techniques and the introduction of modem technology, the area's olive oil production has become very important for the economy of the area, and the oil has become well-known as a quality product well beyond the local borders.

"Colline Teatine" extra virgin olive oil is produced from healthy olives, harvested straight from the tree in the period between October 20 and December 20 of each year. The per hectare yield of olives may not exceed 9 000 kg/ha in the specialized olive groves, with a maximum oil yield of 22%. The only extraction methods permitted are those physical and mechanical processes which most faithfully preserve the particular and original characteristics of the fruit.

The predominant olive variety, "Gentile di Chieti", is a native one and is present in large quantities in all the oils of the region. Very strong evidence of the link between olive oil production and the area in question is given by State archives, which show that there was already a great amount of traffic between ports in the Chieti area and the towns on the Dalmatian coast in the middle and late Middle Ages. In addition, the notarial records kept in the State Archives at Lanciano (Province of Chieti) provide evidence of the central role played in the past by the Fairs taking place in this area, and the specific contribution of local olive oil production in linking the area's economy with that of Naples and of the lands across the Adriatic.

The designation of origin for this area is justified not only by the widespread growing of olives, but also by the cultural and socioeconomic importance of olive growing and olive oil in particular in the local communities. It is above all with the olive oil produced in the Chieti area that the Abruzzese immigrants in New York, a large number of whom are from Vasto, revive their most deeply-rooted traditions. The specification provides for the possibility of using the following additional geographical indications: "Colline Teatine Frentano" and "Colline Teatine Vástese". This meets the need for better geographical identification of designation of origin oil, which in these areas has some slight organoleptic differences which only local experts can detect. In fact, the organoleptic characteristics of "Colline Teatine" oil, while substantially homogeneous, are particularly accentuated in the two smaller areas. This is due to the different admixture of minor varieties which are present alongside the main "Gentile di Chieti" variety and to the circumstance of the two economic units in question having preserved their traditions over the centuries.