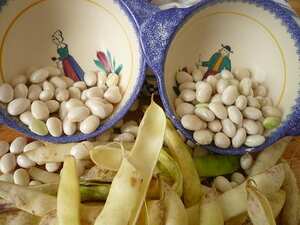 The Coco de Paimpol is an AOP semi-dry haricot bean for shelling presented in pods. The pods are pale yellow mottled with purple, the seed is ovoid and uniformly white and the seed coat is very thin. Cooking is particularly rapid and gives a tender product which melts in the mouth and has a characteristic flowery and nutty flavour.

Haricot beans which qualify for the registered designation of origin ‘Coco de Paimpol' are grown in 85 communes in the north of the départment of Côtes d'Armor in Brittany. The geographical area covered corresponds to the coastal part of the former Breton provinces of Trégor and Goelo. This coastal area, because of its geology, is suitable for vegetable growing and market gardening. It is composed of rocks still covered by a formation of particularly well structured loamy soils which are good for growing beans in. The small temperature range in this region enables the beans plants to mature slowly and well, which is necessary in order to obtain a high quality product. In addition, the maximum summer temperature means that the pods are well matured and have an excellent appearance. The Coco de Paimpol owes it fame also to the skill of its growers, who have preserved the traditional cultivation techniques, in particular manual harvesting.

Cultivation of this bean is part of the long established horticultural tradition of the Paimpol region. It was confined to gardens until 1939. From 1939-45 the coco, because of its nutritional qualities, helped to make up for food shortages. After 1948 marketing was organised on a commercial scale. The beans were first marketed dry and then semi-dry, which turned out to be more profitable. Semi-dry beans are softer, cook more rapidly and are easier to digest. The quality of the product is widely recognised and the Paimpol region today accounts for most of French production of semi-dry coco beans for shelling. Beans entitled to the registered designation of origin ‘Coco de Paimpol' are produced and packed within the geographical area defined for that designation.

The seed used belongs to the species Phaseolus vulgaris L. Sowing is in rows. Harvesting extends from July to November. Harvesting and sorting the pods are done manually after the plants have been uprooted. Only pods which have reached the semi-dry stage are selected and defective pods and impurities are discarded. From when they are packaged until they are dispatched, Cocos de Paimpol are kept in packaging which prevents the beans from heating or from drying out, using the cold moist storage technique.