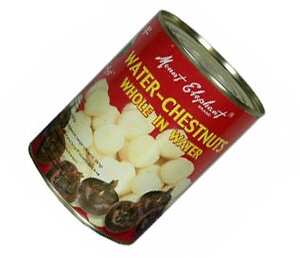 The Chinese water chestnut, more often called simply the water chestnut, is a grass-like sedge grown for its edible corms. It has tube-shaped, leafless green stems that grow to about 1.5 metres.

The Chinese water chestnut is native to China and is widely cultivated in flooded paddy fields in southern China and parts of the Philippines.

The small, rounded corms have a crispy white flesh and can be eaten raw, slightly boiled, grilled, pickled, or tinned. They are a popular ingredient in Chinese dishes. In China, they are most often eaten raw, sometimes sweetened. They can also be ground into a flour form used for making water chestnut cake, which is common as part of dim sum cuisine. They are unusual among vegetables for remaining crisp even after being cooked or canned. They do this because their cell walls are cross-linked and strengthened by certain phenolic compounds, a property shared by other vegetables that remain crisp in this manner, including the tiger nut and lotus root.

The water chestnut is actually not a nut at all, but an aquatic vegetable.