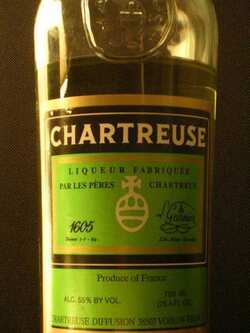 A bottle of Chartreuse

Chartreuse is a French liqueur composed of distilled alcohol flavoured with 130 herbal extracts. The liqueur is named after the Grande Chartreuse monastery where it was formerly produced, located in the Chartreuse Mountains. The liquor is nowadays produced in a factory in the nearby town of Voiron under the supervision of monks from the monastery.

Chartreuse has a very strong characteristic flavour. It is very sweet, by turns both spicy and pungent. By way of comparison, it is quite similar to Liquore Strega or Galliano. Its taste varies depending upon the serving temperature. It is often served on ice, but can be added to cocktails or added to a mixer. Some mixed drink recipes call for only a few drops of Chartreuse, so assertive is its flavour. Though the flavour is highly complex, reminiscent of anise, which is easily discernible as one of the ingredients.