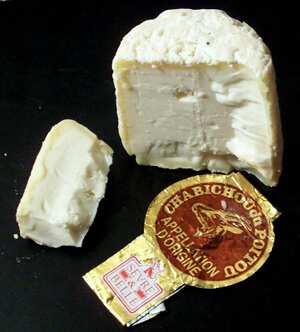 Chabichou (also known as Chabichou du Poitou) is a traditional AOP soft, unpasteurised, natural-rind French goat cheese (or Chèvre) with a firm and creamy texture. Chabichou du Poitou, made exclusively in the Poitou-Charentes region, acquired its AOC status in 1990.

Chabichou of Poitou is made of fresh and whole goats' milk. It is quickly but slightly pressurised: less than 100 microlitres per litre of milk. The milk is then coagulated during a 24-hour period at between 20 and 22°C. The curd is then moulded manually with a ladle or mixer into perforated moulds and left to drain for another 18 to 24 hours while turning it over it two or three times, maintaining at 22°C. They are then removed from the moulds and salted with dry salt or sometimes in a brine bath. It is then laid out in drying rooms, i.e. it is drained while being placed in moulds for 24 to 48 hours. Afterwards it is left to mature in cellars at between 10 and 12°C and within 80% to 90% humidity. It remains there for at least 10 days, but generally for two or three weeks. Some are even preserved for months for a more vigorous flavour.