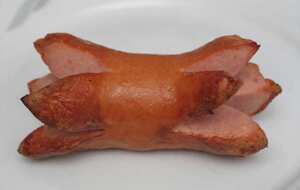 Cervelat, also spelled cervelas, servelat or zervelat, is a type of cooked sausage produced mainly in Switzerland and in parts of Germany. In its modern Swiss variety, it consists of a mixture of beef, bacon and pork rind that is packed into zebu (a hump-backed ox of Asian origin but now found widely in South America) intestines, slightly smoked and then boiled.

Swiss cervelats are made of roughly equal parts of beef, pork, bacon, pork rind and ice, as well as spices, curing salt and cutter additives. The ingredients are very finely minced in a cutter, packed into cow intestines, smoked for an hour at 65 to 70 °C and then boiled at 75°C. Traditionally, Swiss cow intestines were used, but producers switched to Brazilian zebu intestines after the local materials became too rare and expensive.

Cervelats can be prepared in numerous ways. They can be eaten cooked, boiled, grilled or fried. They are also served raw, either as part of a salad or as a whole with bread and mustard.

Effective April 1, 2006, the European Union banned the import of certain animal parts from Brazil, including cow intestines, as a measure aimed at preventing the spread of mad cow disease. Even though not an EU member state, Switzerland is bound to observe European food protection laws as a result of treaty agreements with the Union. As a result, the Swiss and German stockpiles of the Zebu intestines that are essential to the sausage's production are expected to be depleted in late 2008.

In January 2008, the Swiss meat industry announced that a national "cervelat task force" had failed in an exhaustive search for an acceptable alternative to the zebu intestines. The Swiss government has entered into negotiations with the EU to seek an exception for zebu intestines, and Swiss scientists have been dispatched to Brazil in order to establish that the intestines pose no risk of transmitting mad cow disease.