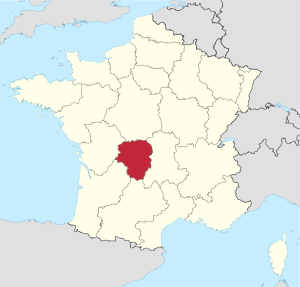 This wiki cheese category page contains detailed information and photographs of cheeses produced in the French region of Limousin.

Limousin is one of the 27 regions of France. It is composed of three départements: Corrèze, Creuse and the Haute-Vienne. Situated largely in the Massif Central, as of January 1st 2008, the Limousin comprised 740,743 inhabitants on nearly 17 000 km2, making it the second least populated region of France after Corsica. Forming part of the South-West of France, Limousin is bordered by the regions Centre to the north, Poitou-Charentes and Aquitaine to the west, Midi-Pyrénées to the south and Auvergne to the east. Limousin also forms part of Occitania.

The following 8 pages are in this category, out of 8 total.