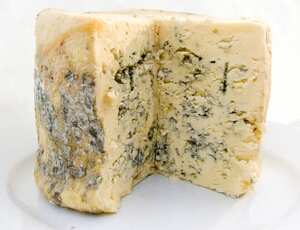 Cashel Blue is a hand-made, semi-soft, blue veined cows’ milk cheese. It was the first Irish blue cheese, named after the Rock of Cashel overlooking the pastures close to the farm of Jane and Louis Grubb who make it.

The cheese has large blue flecks, caused by Penicillium roqueforti. It is frequently used in cooking as it is not as salty as other blue cheeses. Tt was first marketed in 1984 and is medium strong with a creamy texture.

More recently, a sister cheese, Crozier Blue, was launched and is made with ewes’ milk.