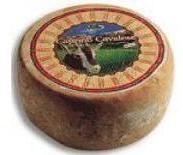 Characteristics: Cylindrical form with a diameter of 19-21 cm and sides of 6-9 cm in height; firm cheese, white or yellow in colour; sparse, small fissures; hard, smooth rind; weight varies between 2 and 3 kg; ready to eat after 15-20 days.

Production area: Throughout the province of Trento.

History: In the past, goats' milk was traditionally processed at home and the cheese was used for private consumption. During the first few decades of the past century, it became necessary to carry out this process in “caseifici turnari" (cooperative dairies which worked in shifts) given that the amount of milk produced exceeded private consumption requirements. This is the case, for example, in Predazzo, where the cooperative dairy specializing in products made only from goats' milk survived until the early 1970s. From the 1960s, goat-farming went into decline and almost disappeared. However, the 1990s saw its vigorous revival, with working livestock, and as a result goat’s milk cheese came back into production at a single farming level, but particularly at the cooperative dairies of Cavalese (Val di Fiemme) and Fiavé (Valli Giudicarie). Evidence of the tradition of goat-farming and making cheese from goat’s milk and a mixture of goat’s and cow’s milk can be found in an article in the 1926 edition of the “Almanacco agrario‿" (Agricultural Almanac).

Breeding method: The milk used must come from goats fed on alpine grasses or natural pasture. Permitted simple or compound fodder can be integrated in daily food rations but the use of any preservative or additive is strictly forbidden.

Production technique: The milk, which is collected once or twice a day, is heated to a temperature of 38-40 °C, with the addition of a strain-selected starter culture. Calf or kid rennet (for a stronger-flavoured product) is added and coagulation occurs in 20-25 minutes. The curds are broken into corn grain-sized pieces and are semi-cooked at 45 °C. They are then placed into perforated moulds and warm water is poured over them. After several turns, they are salted in brine for 20-24 hours, after which they are stored in a maturing room for a minimum of 45 days and maximum of 90 days. When conditions allow, a mild Caprino variety is also produced, which is ready to eat in 15-20 days. These production techniques can vary depending on seasonal conditions or the characteristics of the milk used.